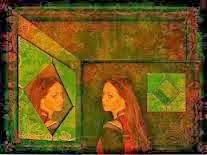 Seems you have been missing from the latest get together?  What is going on?  I believe that you may have dropped out of circulation and at the very least, certainly not in any conversations that I have heard or been a part of.  Although I mention you often and speak on your behalf constantly, I feel as if you are dying.  Are you aware that the General Public doesn't even know that you exist?

The constant reminder that you are never meant to be spoken about has grown to be a "dead subject."  Makes you wonder!! I have grown so exhausted from just defending you, that I have had to retreat, hence the letter and my decision to write.  It seems that the cover-up of people and their subsequent deaths is so "Taboo" that anything we even utter is to be considered as "Threatening."

Your burial is all my family is interested in.  I know that for certain.  Especially after a virtual stranger told me in the most frank of manners, "I work for your Mother.  I am a Private Investigator. "  I have to say and Truth be known, I believe and think it was the only thing I actually believed when he spoke.  Of course I did leave the situation behind and found myself worried again and writing to You.

I will admit, you can be embarrassing on just about every level, but I do not support your cover-up.  I mean we all die eventually, but it is nice to have the last word, so to speak.  So if you are in grave danger and it seems (I am speaking from my Guts) as if you might be, please make sure to write all you can so at least there is a trail to follow should you come up missing!  Mysteriously, of course, you are familiar with, "plausible deniability?"

I realize that you are very matter of fact about this Truth, however, some, that have been paying attention to the random appeal out there, might realize that making a simple phone call to ask you family to stop harassing you, ends in a letter to you, may ask themselves this question, "Why?"