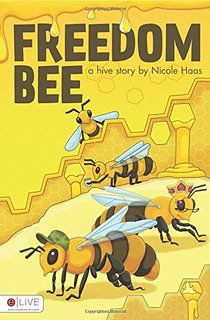 From Wikipedia, the free encyclopedia
For the 1995 film, see Tall Tale (film). 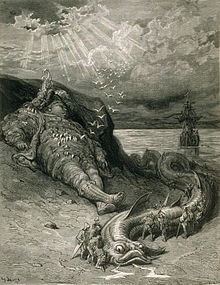 Rabelais' giant, Pantagruel, sleeps after his encounter; curious onlookers surround the sea serpent he has vanquished. Woodcut by Gustave Doré
A tall tale is a story with unbelievable elements, related as if it were true and factual. Some stories such as these are exaggerations of actual events, for example fish stories ("the fish that got away") such as, "That fish was so big, why I tell ya', it nearly sank the boat when I pulled it in!" Other tall tales are completely fictional tales set in a familiar setting, such as the European countryside, the American frontier, the Canadian Northwest, or the beginning of the Industrial Revolution.
Tall tales are often told in a way that makes the narrator seem to have been a part of the story, and are usually humorous or good-natured. The line between legends and tall tales is distinguished primarily by age; many legends exaggerate the exploits of their heroes, but in tall tales the exaggeration looms large, to the extent of becoming the whole of the story.

The tall tale is a fundamental element of American folk literature. The tall tale's origins are seen in the bragging contests that often occurred when the rough men of the American frontier gathered. The tales of legendary figures of the Old West, some listed below, owe much to the style of tall tales.
The semi-annual speech contests held by Toastmasters International public speaking clubs may include a Tall Tales contest. Each and every participating speaker is given three to five minutes to give a short speech of a tall tale nature, and is then judged according to several factors. The winner and runner-up proceed to the next level of competition. The contest does not proceed beyond any participating district in the organization to the International level.
The comic strip Non Sequitur sometimes features tall tales told by the character Captain Eddie; it is left up to the reader to decide if he is telling the truth, exaggerating a real event, or just telling a whopper.

Some stories are told about exaggerated versions of actual historical individuals: 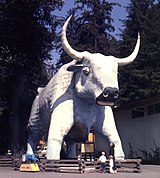 Similar traditions in other cultures[edit]

The skvader, an example of a tall tale hunting story.
Similar storytelling traditions are present elsewhere. For instance:

The Australian frontier (known as the bush or the outback) similarly inspired the types of tall tales that are found in American folklore. The Australian versions typically concern a mythical station called The Speewah. The heroes of the Speewah include:
Another folk hero in Australian folklore is Charlie McKeahnie, the hero of Banjo Paterson's poem "The Man from Snowy River", whose bravery, adaptability, and risk-taking could epitomise the new Australian spirit.

The Canadian frontier has also inspired the types of tall tales that are found in American folklore, such as:

The Columnar basalt that makes up the Giant's Causeway; in legend, a fine set of hexagonal stepping stones to Scotland, made by Finn mac Cumail
Some European tall tales include:

Early 20th century postcards became a vehicle for tall tale telling in the US.[3][4] Creators of these cards, such as the prolific Alfred Stanley Johnson, Jr.,[5] and William H. "Dad" Martin, usually employed trick photography, including forced perspective, while others painted their unlikely tableaus,[4] or used a combination of painting and photography in early examples of photo retouching.[6] The common theme was gigantism: fishing for leviathans,[4][7] hunting for[4][8] or riding[9][10] oversized animals, and bringing in the impossibly huge sheaves.[4][11] An homage to the genre can be found on the cover of the Eat a Peach (1972) album by The Allman Brothers Band.

Muddering Quietly . . . . .the mimics are. . . . .transcribing youtube to only bring the no english language to the edge of to sow^ore to knights: its the link!!

From Wikipedia, the free encyclopedia
The Purge: Anarchy is a 2014 American social science fiction action horror film written and directed by James DeMonaco. The sequel to the 2013 film The Purge, it stars Frank Grillo, Carmen Ejogo, Zach Gilford, Kiele Sanchez, Zoë Soul and Michael K. Williams while Edwin Hodge is the only one to reprise his role from the first film. It was released worldwide on July 18, 2014.[3] It is the second installment in DeMonaco's Purge film series.
The film was met with generally mixed reviews, with most critics agreeing the film was an improvement over the original, and grossed over $111 million. The movie is notable for its dramatic change over the original: while the first film was set entirely in one house, this film is set in the Los Angeles area to give the notion of what usually happens during the Purge. A third film in the series,The Purge: Election Year, is set to be released on July 1, 2016.

In the early 2010s, "The New Founding Fathers of America" have established a new totalitarian government and a police state, following economic collapse. Using the 28th amendment of the U.S Constitution, the government has established one night a year - called "The Purge", which occurs on March 21 to 22, in which all crime is legal and all police, fire, and medical emergency services remain unavailable for 12 hours from 7 p.m. until 7 a.m. the next day. The only rules are that no government officials with authorization levels of 10 and higher are to be disturbed and all weapons above Class 4 (explosive devices such as grenades, rocket launchers, bazookas, etc.) are forbidden. Anyone who violates the rules of the Purge would be publicly executed by hanging. The purge has resulted in crime and unemployment rates plummeting to 1% and a strong economy. Although it is thought to be used as an act of catharsis for the U.S. populace, in reality, it is used as a method of artificial population control as the unemployed poor in slum neighborhoods are usually the main targets.

In March 21, 2023, the media credits the Purge for low unemployment and poverty levels across the country. Hours before the annual Purge begins, people either prepare to commit violence or barricade themselves indoors. Meanwhile, an anti-Purge resistance group intermittently hacks into TV programs to broadcast messages challenging the system, stating that the Purge does not cleanse aggression, but rather eliminates the poor.
In Los Angeles, a waitress named Eva Sanchez (Carmen Ejogo) rushes home to her daughter Cali (Zoë Soul) and her terminally ill father. As they prepare to lock down for the evening, Eva's father slips out and into a waiting limo. A note left behind explains that he has sold himself as a Purge offering for $100,000 to be paid to Eva following the Purge.
Married couple Shane (Zach Gilford) and Liz (Kiele Sanchez) are driving to Shane's sister to wait out the Purge. Their car dies just as the Purge commences. A gang that cut their fuel line when they stopped at a market appears, forcing Shane and Liz to flee on foot. Elsewhere, an unnamed off-duty police Sergeant (Frank Grillo) tells his ex-wife that he must Purge to avenge the death of his son, and goes out into the streets heavily armed.
Moments after the Purge commences, a truck pulls up at the apartment house and disgorge heavily armed paramilitary men into the neighborhood. The apartment building's superintendent, who felt rejected by Eva in the past, bursts in with a shotgun intending to rape and kill them both. The paramilitary fighters enter the house, kill him with multiple gunshots, and drag Eva and Cali out into the street to be taken to Big Daddy (Jack Conley) for his own personal purge. The Sergeant drives by and kills the paramilitary, wounds Big Daddy and rescues Eva and Cali. Returning to his car, Sergeant finds Shane and Liz hiding in the back. The Sergeant is forced to take them when Big Daddy begins firing aminigun at Sergeant's car. When the heavily damaged car breaks down a few blocks later, Eva promises him the car of her co-worker Tanya (Justina Machado) if the Sergeant takes them to her apartment.
As the five survive intense street fighting, they notice a man in a suit tied to a wall outside with a knife in his stomach, implying that many wealthy Purgers and paramilitary men are being murdered by Anti-Purge resistance fighters. After reaching Tanya's apartment, Eva admits that there is no car. Tanya's sister Lorraine (Roberta Valderrama) suddenly shoots Tanya for sleeping with Lorraine's husband. As the group flees, Big Daddy, who has tracked them through traffic cameras, arrives with more armed guards. The groups evades Big Daddy only to be captured by the gang that was pursuing Liz and Shane.
The gang is paid to deliver victims to a death theater where wealthy, upper-class Purgers bid to hunt and kill them for sport in a chamber. Shane, Eva, Cali, Liz, and the Sergeant fight back, killing and driving off the Purgers. The security forces swarm the arena, killing Shane. Anti-Purge resistance fighters storm the compound to rescue the group and eliminate the Purgers including the upper class ones. Liz chooses to fight with the resistance group to avenge Shane, while the Sergeant threatens a wealthy Purger and hijacks her Cadillac SUV, and drives off with Eva and Cali.
The Sergeant drives to a suburban neighborhood. He explains that a year earlier, Warren Grass (Brandon Keener), killed the Sergeant's son while drunk driving, getting off with light charges due to a technicality. Sergeant attacks Grass and his wife in their bedroom, but he forgives Grass and spares his life. Leaving the house, the Sergeant is shot and wounded by Big Daddy, who says the New Founding Fathers believe the Purge eliminates too few of lower class. They have secretly dispatched death squads to increase the body count. He states the unwritten rule: do not save people. As Big Daddy is about to kill Sergeant, Grass appears and shoots and kills Big Daddy. Eva, Cali, and Grass have a standoff with Big Daddy's death squad when the siren blares, ending the 12-hour Purge and forcing the death squad to leave the scene. Grass, Eva, and Cali rush the Sergeant to the hospital as emergency services begin cleaning up after the Annual Purge.
at March 18, 2016 No comments:
Newer Posts Older Posts Home
Subscribe to: Posts (Atom)