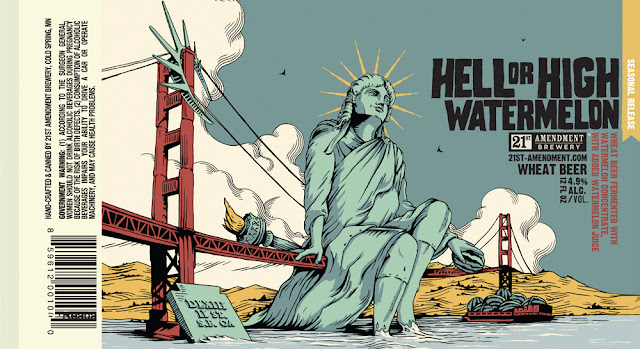 Chimp Astronaut Spaces Out in
21st Amendment Brewery’s
‘American Icon’ Artwork
AMERICA’S FIRST ASTRONAUT chimpanzee floats in space in some surprisingly cool beer packaging that ventures far beyond standard macho marketing.
British artist Joe Wilson produced the eye-catching illustration for Bitter American session ale, brewed by San Francisco’s 21st Amendment Brewery. “That was a nice idea to center it around Ham the Astrochimp, who was undoubtedly a bitter American,” Wilson told Wired.com in an e-mail interview.
The brewery’s marketing firm, TBD Agency came up with the visual concepts, packaging designs and rough sketches. The company hired Smith on the strength of a Statue of Liberty illustration he did for Public Finance magazine. “They asked me to create a series of images based around the loose theme ‘American icons,'” Wilson said. “They already had the names of the beers, so this was a case of coming up with American subject matter and giving it a twist.”
21st Amendment wanted to establish a cheeky alternative to its mainstream competitors and that’s precisely what Wilson delivered with his drawings of the space chimp and other American icons specified by TBD. For the history-on-a-can theme, Wilson drew Paul Revere (for a black IPA calledBack in Black), Abe Lincoln and his Mount Rushmore companions (Brew Free or Die IPA), the Statue of Liberty (Hell or High Watermelon wheat beer) and Franklin D. Roosevelt (Fireside Chat winter spiced ale).
“Above all the work had to be original and stand out on the shelves,” Wilson said. “The feedback has been great, with people buying this stuff just for the way it looked.”
Besides the exposure and paycheck, Wilson received a tasty bonus for his efforts. “I got this wonderful big package of beer through the door after we had finished the first few packages,” he said. Check the gallery for Wilson’s finished graphics, accompanied by the artist’s concept sketches.
[via Lovely Package and Laughing Squid]
See Also:
at July 22, 2015 No comments:
Newer Posts Older Posts Home
Subscribe to: Posts (Atom)