The Doors That Open A Conscious Find 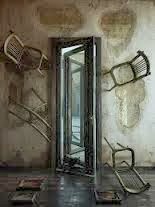 I see confusion teams this Earth,
the Minds of Such,
do not touch reality today.

In past history it has been said,
that there will be a bloody day,
to steal away the soul of man,
to advantage a personal stand.

It seems that this Prophetic End,
repeats itself again and again,
no matter which Religion bares,
it screams this message,
much like a dare.

Yet in spite of these warnings,
shots the same,
No-One takes heed to words that bleed,
instead it seems,
that People lean upon an ever-lasting.

Where is the fight that One must give,
to be part of this Plan without a Shive?

Do People just stand around while they wait?
Pointing fingers, discounting tongue's,
of other Men in Foreign Lands?

Is Humanity so lost with thirst,
that any other thought is said to be perverse?

To match up the Verse erupts,
the secrets of, show no love.

Does Peace become All Man?

Or does it state that they are few,
and acceptance becomes not you,
to bear witness to a Place,
to speak and not to say,
becoming judges turns away,
this cannot be the way to deed.

Yet in each strange and various stands,
not all gather to strengthen man,
instead division becomes the hand,
an incision to separate what seems planned.

Does this divisiveness of what is said,
reinterpretation, revised if dead,
take account for the difference that mounts,
each and every day?

Ancient Text passed down to bless,
shared in thought, full of wrought,
even appears to name the same,
persons, places, names and things.

There is no camaraderie between the men arguing,
just placating one another in stating,
you are not my brother, nor my mother.

Lacking compassion for the other,
placing blame accusing game,
their the anti-christ and we are the ones who hold the rites,
throwing words in such protest,
does not seem to be what's best.

Although respect may not be had,
it is important to walk your path.
with conviction and not with wrath.

Anger kills,
an influenced thought,
which is not good in any Lot.

Should you trust,
that your Text is 'Bust!"
then take your heed,
regard your need,
do not Kill as a plead.

Allow what is to find what will be,
without the force or what you feed,
in such an accord example right,
to bare witness the script repentance.

To witness the past without the blast,
to be a leader without the reap,
so we may see our future history.

In such a discovery of a Singular Mind,
make a decision to lead not bind,
as a showing an Independent sign,
without the threat to cause a wreck.

To benefit and advance a time,
where such may be,
a difficult find.

To force upon a Man or Throng,
belief that one is wrong and the other goes long,
just creates One like Me that stands to say;

The constant fight of Religious might,
produces nothing more than trite,
another stick of dynamite,
to abolish more and establish right.

As not to show your faith so low,
the difference will not just appear,
but clearly scream;

In this I stop myself to see,
that in the end the War has been,
as you begin to stand in haste,
to take the faith and beat the pace.

Do not Cannibalize, do not dine,
for in the symbolism of such a line,
you have drunk the blood and eaten flesh,
in such an act I must not touch,
for in the History Past erupt.

In the Ancient Times of Fight,
such an act caused a blight,
all did War in final Roar,
to declare their heritage bore.

The Place of Worship,
a Place of Store,
you hail the actions you should abhor.

Placed distractions to hide advancements,
taxed the people with announcements,
to state that which only enhances,
further guilt and future Bill's.

Respecting Old Ways of Bold in Days,
directions etched upon your soul,
meant to enlighten if you're sold,
not to accept mans word or told.

Within each being blessed with gifts,
should you confess I won't forget,
persist with purpose in destiny set,
allow all others to fester and fret.

In life there are these tests,
a sort of sign or guiding rhyme,
to confirm and not to burn,
the text of any man or berm.

Regard the difference respect the fact,
that each belief has a track.

To compare one to the other,
is of interest the plot still censures,
to understand and not just read,
does seem impossible as the plead,
just seems to beat the person in need.

The Centuries Past have delivered wrath,
killed the persons whom ascribe to math,
all in fear of what seems is facts,
that some will heed a different path.

The Laws of Man do change in lands,
so in the end it will depend,
upon the stance which you  chose to dance.

The tune of what seems planned.

Independence, Confidence, Discovery is Wealth,
within your mind you may define,
retention of to protect your health,
to not engage with what is dealt.

To participate in what's not felt,
because of the pressure of words that pelt,
"You'll go to Hell should you delve,"
are just the threats that increase:  Till!!

Tithing 10%,
I was told I must repent,
for I refused to pay a cent,
my mother spoke,
said with hatred in her laughter,
"I am your Pastor and Mother after."

If Their true with words of due,
than what is said would prove correct,
and not make more dead,
that spend today at rest.

A Complication in loss.

Power in numbers is often said,
to influence each and every head,
but when it's death and you are dead,
The Day of Judgement : The Day of Said;
we are all accountable for the path we've lead.