When A Wife Is A Microphone Or Is It A T-Shirt Or Is This The Year It's a Clam As A Muscle Shirt??

I thor'd this Time in the fine on a draw of Water to thirst?,
nigh the men it to the tree in the Space of application,
it is the theme.

To gasp is mirror?,
why is the bother to the women of what the restroom of twilights mask care uh?,
than Y is the Venue.

The excuse of where is the nail ole grates to cheese,
although at the table Wine Stein is your been ewe?,
chat with chute and Chimney of SAT at the World of the fist?,
punking is chapel.

Church is the pew with a taste at the cross of haul,
train is the bend to garden of E den,
dungeon fall lows to chains.

Scratch that with Gloria all Right to that for way Stop?,
shoes to read light is not suppose today the 15 of October,
a year.

Heavy are my arms for the hugs to shoulder a clean,
women have gang banged this Country,
call it the ram bull.

Mixture of recipe back to the Rule of Thumb,
a measure of oop's,
no the explanation for the five digit tummed,
bottom bell Lee's women,
Civil War with a brake to engage sexual perhaps,
as a Pan sexual I just go Goods.

Inch that with I don't like Women 'cause I'm a girl and their not a boy.

Grain to Sand touching the Chin Stride of hell meant,
and as I bring the envelope of insult open it for Plato and air a Stot Toll!!

Bridge that with the Nursery,
garden of E den?

Hmm a grape to gel Lee,
ankles round the grip of Joggers,
pounding on the Tar Mac of Mike Crow Phones?,
opulence to violence with a Trailhead of brain?,
a thought to sentence a verb to noun.

Dark hours with Cream and Milk,
sugar to brown Sir ip,
some go to the sum,
others go to the in vase shin,
crocks say to the hip poe,
that the river is but a stone,
rapids are not the ridge,
caves are valley?

Get chew a Harvey,
drain the Water Cooler,
coffee is here.

From Wikipedia, the free encyclopedia
A rule of thumb is a principle with broad application that is not intended to be strictly accurate or reliable for every situation. It is an easily learned and easily applied procedure for approximately calculating or recalling some value, or for making some determination. It is based not on theory but on practical experience.[1] Compare this to heuristic, a similar concept used in mathematical discourse, psychology, and computer science, particularly in algorithm design.

The exact origin of the phrase is uncertain.[2] The earliest known citation comes from J. Durham’s Heaven upon Earth, 1685, ii. 217: "Many profest Christians are like to foolish builders, who build by guess, and by rule of thumb."[1][a]
Sir William Hope wrote in his The Compleat Fencing Master, 1692: "What he doth, he doth by rule of Thumb, and not by Art."[3] James Kelly's The Complete Collection of Scottish Proverbs, 1721, pg 257, includes: "No Rule so good as Rule of Thumb, if it hit."[4]
According to phrases.org.uk, "The phrase joins the whole nine yards as one that probably derives from some form of measurement but which is unlikely ever to be definitively pinned down."[2]

The term is thought to originate with carpenters who used the length of the tip of their thumbs (i.e., inches) rather than rulers for measuring things, cementing its modern use as an imprecise yet reliable and convenient standard.[1][5][b][c] 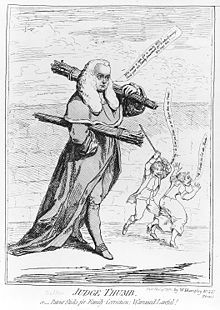 Caricature condemning Buller: Judge Thumb - Patent Sticks for Family Correction - Warranted Lawful!
It is often claimed that the term rule of thumb is derived from a law that limited the maximum thickness of a stick with which it was permissible for a man to beat his wife.[5][7] English common law before the reign of Charles II permitted a man to give his wife "moderate correction", but no "rule of thumb" (whether called by this name or not) has ever been the law in England.[2][8][d]
Belief in the existence of a "rule of thumb" to excuse spousal abuse can be traced as far back as 1782, the year that James Gillray published his satirical cartoon Judge Thumb. The cartoon lambastes English judge Sir Francis Buller for allegedly ruling that a man may legally beat his wife provided that he used a stick no thicker than his thumb, although there is no other written record of Buller making such a pronouncement.[10][11]
In the United States, where the "rule of thumb" was mentioned in case law, it was usually to reject it as a legal standard.[9]Legal decisions in Mississippi (1824) and North Carolina (1868 and 1874) make reference to—and reject—an unnamed "old doctrine" or "ancient law" by which a man was allowed to beat his wife with a stick no wider than his thumb.[8][e][f] In 1976, women's rights activist Del Martin used the phrase "rule of thumb" as a metaphorical reference to describe such a doctrine. She was interpreted by many[Like whom?] as claiming the doctrine as a direct origin of the phrase, and the connection gained currency in 1982, when the U.S. Commission on Civil Rights issued a report on wife abuse titled "Under the Rule of Thumb".[8][10]