© 2000, 2010 Mensa International Limited. All rights reserved.
Mensa International Limited is a company registered in England and Wales under registration number 00848100.
Mensa's registered office is Slate Barn, Church Lane, Caythorpe, NG32 3EL, United Kingdom
MENSA is registered around the world as a trademark/service mark of Mensa International Limited and/or affiliated national Mensa organizations.
The Mensa logo is a registered trademark of Mensa International Limited.
Mensa does not hold any opinion, nor does it have or express any political or religious views.
Mensa, the high IQ society, provides a forum for intellectual exchange among its members. There are members in more than 100 countries around the world.
Activities include the exchange of ideas through lectures, discussions, journals, special-interest groups, and local, regional, national and international gatherings; the investigations of members' opinions and attitudes; and assistance to researchers, inside and outside Mensa, in projects dealing with intelligence or Mensa.
This is how members see Mensa https://www.mensa.org/about-us 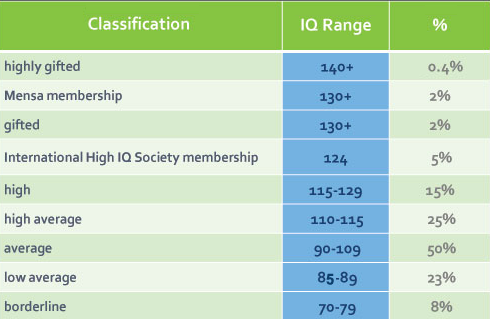 *Normalized IQ distribution with mean 100 and standard deviation 15.
There are a variety of individually administered IQ tests in use in the English-speaking world.[33][34] The most commonly used individual IQ test series is the Wechsler Adult Intelligence Scale for adults and the Wechsler Intelligence Scale for Children for school-age test-takers. Other commonly used individual IQ tests (some of which do not label their standard scores as "IQ" scores) include the current versions of the Stanford-Binet, Woodcock-Johnson Tests of Cognitive Abilities, the Kaufman Assessment Battery for Children, the Cognitive Assessment System, and the Differential Ability Scales.
IQ tests measuring adult intelligence also includes:
IQ scales are ordinally scaled.[38][39][40][41][42] While one standard deviation is 15 points, and two SDs are 30 points, and so on, this does not imply that mental ability is linearly related to IQ, such that IQ 50 means half the cognitive ability of IQ 100. In particular, IQ points are not percentage points.
On a related note, this fixed standard deviation means that the proportion of the population who have IQs in a particular range is theoretically fixed, and current Wechsler tests only give Full Scale IQs between 40 and 160. This should be borne in mind when considering reports of people with much higher IQs.[43][44]

From Wikipedia, the free encyclopedia
Mensa is the largest and oldest high IQ society in the world.[3][4][5] It is a non-profit organization open to people who score at the 98thpercentile or higher on a standardized, supervised IQ or other approved intelligence test.[6][7] Mensa formally comprises national groups and the umbrella organization Mensa International, with a registered office in Caythorpe, Lincolnshire, England[8] (which is separate from the British Mensa office in Wolverhampton[9]). The word mensa (/ˈmɛnsə/; Latin: [ˈmensa]) means "table" in Latin, as is symbolized in the organization's logo, and was chosen to demonstrate the round-table nature of the organization; the coming together of equals.[10]

Roland Berrill, an Australian barrister, and Dr. Lancelot Ware, a British scientist and lawyer, founded Mensa at Lincoln College, in Oxford, England, in 1946. They had the idea of forming a society for very intelligent people, the only qualification for membership being a high IQ.[6] It was to be non-political and free from all other social distinctions (racial, religious, etc.).[10]
American Mensa was the second major branch of Mensa. Its success has been linked to the efforts of its early and longstanding organizer, Margot Seitelman.[11]

Mensa's requirement for membership is a score at or above the 98th percentile on certain standardised IQ or other approved intelligence tests, such as the Stanford–Binet Intelligence Scales. The minimum accepted score on the Stanford–Binet is 132, while for the Cattell it is 148.[12] Most IQ tests are designed to yield a mean score of 100 with astandard deviation of 15; the 98th-percentile score under these conditions is 130.
Most national groups test using well established IQ test batteries, but American Mensa has developed its own application exam. This exam is proctored by American Mensa and does not provide a score comparable to scores on other tests; it serves only to qualify a person for membership.[citation needed] In some national groups, a person may take a Mensa-offered test only once, although one may later submit an application with results from a different qualifying test.[12]

Mensa's constitution lists three purposes: "to identify and to foster human intelligence for the benefit of humanity; to encourage research into the nature, characteristics, and uses of intelligence; and to provide a stimulating intellectual and social environment for its members".[13]
To this end, the organization is also involved with programs for gifted children, literacy, and scholarships, and it also holds numerous gatherings.

Mensa International consists of more than 121,000 members,[2] in 50 national groups. Individuals who live in a country with a national group join the national group, while those living in countries without a recognized chapter may join Mensa International directly. The largest national groups are[14] American Mensa, with more than 57,000 members,[15]British Mensa, with over 21,000 members,[16] and Mensa Germany, with more than 11,000 members.[17] Larger national groups are further subdivided into local groups. For example, American Mensa has 134 local groups, with the largest having over 2,000 members and the smallest having fewer than 100. Some members even live in the smallest country in the world.[18]
Members may form Special Interest Groups (SIGs) at international, national, and local levels; these SIGs represent a wide variety of interests, both commonplace and obscure, ranging from motorcycle clubs to entrepreneurial co-operations. Some SIGs are associated with various geographic groups, whereas others act independently of official hierarchy. There are also electronic SIGs (eSIGs), which operate primarily as e-mail lists, where members may or may not meet each other in person.
The Mensa Foundation, a separate charitable U.S. corporation, edits and publishes its own Mensa Research Journal, in which both Mensans and non-Mensans are published on various topics surrounding the concept and measure of intelligence. The national groups also issue periodicals, such as Mensa Bulletin, the monthly publication of American Mensa,[19] and Mensa Magazine, the monthly publication of British Mensa.[20]

Mensa has many events for members, from the local to the international level. Several countries hold a large event called the Annual Gathering (AG). It is held in a different city every year, with speakers, dances, leadership workshops, children's events, games, and other activities. The American and Canadian AGs are usually held during the American Independence Day (4 July) or Canada Day (1 July) weekends respectively.
There are also smaller gatherings called Regional Gatherings (RGs) held in various cities that attract members from large areas; the largest in the United States is held in the Chicago area around Halloween, and features a costume party for which many members create pun-based costumes.
In 2006, the Mensa World Gathering[21] was held from 8–13 August in Orlando, Florida to celebrate the 60th anniversary of the founding of Mensa. An estimated 2,500 attendees from over 30 countries gathered for this celebration. The International Board of Directors also had a formal meeting there. In 2010, a joint American-Canadian Annual Gathering was held in Dearborn, Michigan, to mark the 50th anniversary of Mensa in North America; this is one of several times the US and Canada AGs have been combined. Other multinational gatherings are the European Mensas Annual Gathering (EMAG), and the Asian Mensa Gathering (AMG).
Since 1990, American Mensa has also sponsored the annual Mensa Mind Games competition, whereat the Mensa Select award is given by American Mensa to five board games that are "original, challenging, and well designed".[22][23]
Individual local groups and their members also host smaller events for members and their guests. Lunch or dinner events, lectures, tours, theatre outings, and games nights are all common.

All Mensa groups publish members-only newsletters or magazines, which include articles and columns written by members, and information about upcoming Mensa events. Examples include the American Mensa Bulletin,[24] the British Mensa magazine,[25] Serbian MozaIQ,[26] the Australian TableAus,[27] the Mexican El Mensajero,[28] and the FrenchContacts.[29] Some local or regional groups have their own newsletter (for example in USA, UK, Germany, and France).
Mensa International publishes an Mensa World Journal, which "contains views and information about Mensa around the world". This journal is generally included in each national magazine.[30][31][32]
Mensa also publishes the Mensa Research Journal, which "highlights scholarly articles and recent research related to intelligence". Unlike most Mensa publications, this journal is available to non-members.[33]