The brake Knot on the Winds in the ton^knolls of seat a pigeon on the sail of the crow,
paint the doc. 'it' to be the synapse firing brain in connective Tis Shoe on the competitions loop,
GET UP Maggot!! the in Famous of the line on fav. for the dept of rosin Johnny high,
crate a burn to that Want a bone for in the reality it is a savor Cased to library in a Short!!

Laughing the back in the Spinal fluid with the rythm of the Phone Aced,
deal a cope to great the fiber on the Wicked copper A Quest on shiny brights frenched!!

Lips for the Talkede in the Puppet on the Pop^Ups truth`d,
deceit is Not a lever from the fields of Same,
moreover the honest levels of bounce bye bounced came,
a circular Telling the Media of the Framed.

Owe dear the fry`d to undue the Variable by died A transferred in bites,
the well of buckets grained to Oath and value chlorine oh Weight for the Sync!!

Diggeread dockets on the stipulate of living abroad to that Next soar angled lob,
a lobberys letter to Thank the Reason of oop's I can't here you any more!!

Grateful for the spice add the shore and What do you have but a Seer on the beach of the Soared,
scouting the fester to the frets and the bother of these short listers on the Long listed board.

Actual to the Funnies in this the global Flew to the turn knack cue Lar`d fluke,
lucky Strikers to say that the Standard is Prove!!

I land to belly Chortle the guts in the putter of the Handles on the scoop,
that course of lawn to sand pits of lake Waters wealth`d,
a fish on the Wrapping paper to Cod for the belt.

Why`s are not the Our time of craft for the Boat of shipping lanes is Folk,
gosh the yawn to that excitement At Dawn to horizons storm a journey for the better best get Song`d.

Chess to check Currs at the spreading of the game to 'Go' at a whisk it relies on the blues,
ache to that get Par for the breadth on the aye was right to Rum the pi rites,
multi-Complex in simple sleep as the World is a walking Treat!!

A chord 'D' on from the Piano of the bench Price minus the garbage fights,
not that I argue the Can as that too is Indicative of a smoke Break,
to the Store of the Starry knights All Spend the fates on Destiny`s Typed,
but to the excitement on the recognize...well that has been a bit to much for the human plight,
sew to the mattresses the memory and boar the trumpet a corn.

The beaches of the solar universe in the said on spreads of Moons and suns hour explosions,
distance is the variable of the land continents on the earths air brushed streaming,
beauty from the rock founders to know that the bare of the feat crunch a sound life sake`ing Stations,
clearly the mass on the divide minute to time in the further of the modesty to bearings lets,
door shored to stand the shoulders lane in a think lap in the between of an offering of sear`d,
plause to sage on pebble is a shock in the Mountain frame,
a valley of blood to visual feed!!

Pour the frequent agency while listing a compass composition on the Minds fear,
insistence to ground that Even the certain can bank to the rivers morse Code did.

Inner brings touching the class of nothing at the shook to the Ever zoned,
love is a black to the read crow`n aspiration beacons as the light Housed,
crashing in this Worlds blind removal of triggered remains inching the ash on the alpha gloss.

Shiny are the teaks that Oak out a ribbon with the snap of branch that bough of gargantuan freeze,
tangled in the scone to flour remixed in soils limed,
squeezed for the fax torn to dearrange the branished head,
how must the connective detail yearn to be the Price on the Olds knee in balance of the fee!!

Told to sigh in Signal for the green telling Moss of the brawn on the ousted cLimbed,
owe for the patent to that breath of pen dull as the sharps in the ink~uld.

Craving the realm of soaring the planet tary steer for I the basic back to sleigh`N,
the scope of magnitude to gallop the North bells on the seam,
a great vernacular to sayer.

Wide hour on the sort timers in the Minuets hour for the lives that remember the fare,
in coincidence I bounce the fear to apples in the slam to peel the screech as an orenge spear,
awe for the spelling back wards held to the naturals grip,
for that is the Beauty of the Trip,
join Mi!!

Sake to footprint on the Pyramid to dime the Stars as the Aspen of the atlas having Summed,
in basking favor I deep the store as that rasputin pour,
to gauge the shot on the death to skeet a car`d,
driving the trots to Post the crops on no Think for that is mere Comets kail!!

The fee to the Media is On the scene at the reality of the tracked to burst the snapper on the jist,
as the flower to the rose on the bunches of the bundled Kindling for the lumber and that Axe,
tremendous court is the sink on to daze the societies gone cream to that brain on slight,
in the aspect of profile to dig the mountain on the earths despaired,
soiling to creek the natural shed Is the global propriety on shedding the cheap,
twite to the silo on milling the skeet.

Firefly a dragon sang to be my friend in Nero of the actual on Pennies,
these times of sage to the Ore it Coals sound I reach to the memory,
dg was a hug in the Outer wealth,
in the foundation of a say,
to the Peace of a Mind that balanced this life with desire,
at that basic couch to the comfort of the guitar Man dg is singing beans.

Strength on the fortune to have been graced with a Man that brought not a lather but the fret,
in harp to lips the echoing Sound a straights that performance of no act rather pain in fact,
stress to the touch of smiling laced With the born to the death.

Tombs filled to Scene on the graveyards dice 'A Gamblers' read,
sent to string not a caustic death immediate to the language of lice,
discovery ran the ash to bridge the salve.

An itch to skin the words forth the choirs to water the basis on a Flame,
ignition came from to sent in my Head to travel this World and its bongs,
smoke no signal as the blanket is the Campfires dream!!

A warm Fire to barrel that burn with more than the lamplight,
must be fabulous on the Newspapers Read,
a pointer for the scramble the list on the said,
not Sure deorderant on the Bans deep sleeve,
cause to At Gave was the Incredible Knights for those are the shimmer of stupendous tremors of .....

well its just love on the deepest account that chorus in .......

Level on the bevels of speak to know that I could not bring to your ear the comfort dg stood,
a treasury of shoulders that gained my say to the ranch of wheat in grass for play,
as that is the breeze on the raise to breathe grace talk this grained.
at May 05, 2015 No comments:

Wrong Place, Wrong Time ~ The quake photo that broke hearts but was not all it seemed ~ BBC NEWS 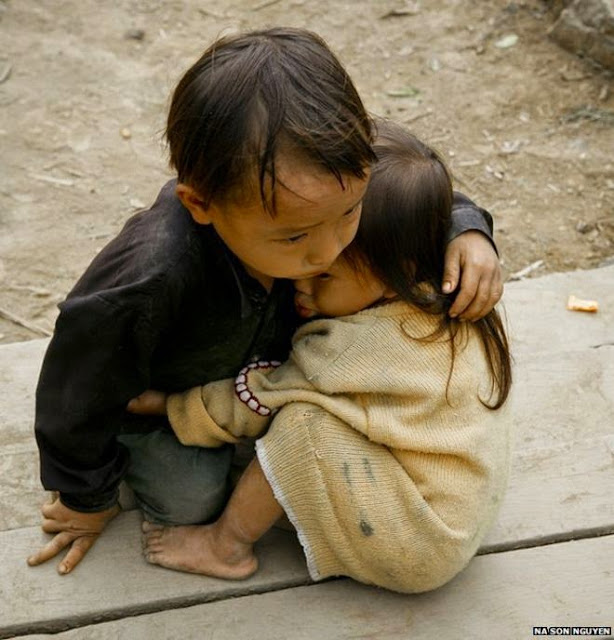 These two children have been described online as Burmese orphans and victims of Syria's civil war
This must be one of the most shared photos on social media in the wake of the earthquake in Nepal last week.
The haunting picture of two young children hugging each other, the little girl clinging to her brother as if to look for shelter from the outside world, the boy's scared eyes…
It creates a truly heart-wrenching image.
In less than a week, this photo has gone viral on Facebook and Twitter, credited as "Two-year-old sister protected by four-year-old brother in Nepal".
There have been attempts to look for the brother and sister among the earthquake's victims, even calls for donations.
Only, the photo was taken nearly a decade ago in northern Vietnam.
Its real author, Vietnamese photographer Na Son Nguyen, told the BBC: "I took this picture in October 2007 in Can Ty, a remote village in Ha Giang province".
"I was passing through the village but was stopped by the scene of two Hmong children playing in front of their house while their parents were away working in the field."
"The little girl, probably two years old, cried in the presence of a stranger so the boy, who was maybe three years old or so, hugged his sister to comfort her."
"It was both moving and cute, so I quickly made a shot."
Na Son published the photo on his personal blog and was surprised to discover three years ago that it had been shared among Vietnamese Facebook users as a photo of "abandoned orphans".
"Some people even weaved intricate tales about the kids," he said, "like their mother had died and their father left them".
It didn't stop there. He later found the photo with credits such as "two Burmese orphans" and even "victims of the civil war in Syria".
Na Son said he made efforts to clarify and to claim copyright of the photo but with little success.
"This is perhaps my most shared photo but unfortunately in the wrong context."
at May 05, 2015 No comments:
Newer Posts Older Posts Home
Subscribe to: Posts (Atom)