Mind Control Has A Toll 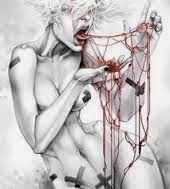 The Mind has sight of what we might,
be capable to do at any time in our life,
I choose fight,
a choice for me made right.

Should you push or shove this gift
or seek the answer creating rift?

What will become of You,
should you chose to pursue,
health and freedom,

Does such wealth contain a key,
which is the way to really See,
as my family continued to scream,
you are a Sin and you will end.

I've seen the sight of ugly acts.
Such things that people do.

A Mindful Game, Mean-Spirited too,
a sorted way to deliver shame,
through Blame, Blame, Blame.

Hours upon hours,
I heard my mother speak,
her Ministry went on Week after Week.

G_d and Sex ruled this Priestess,
and 'Her Speech,
it never ended or reached complete.

No confusion to this thought,
the truth is clear and she lied a lot.

You really had to be in this Ministry,
to understand debauchery has a Plan.

Difficulty always came,
the length of time in her church she reigned,
the hours did not ever wane,
I was so bored, woke if snored.

Sunday mornings, Sunday nights,
she would go on and on,
for Eight, Nine, Ten hours a day.

This was an every week display,
with Wednesday evenings another day,
she'd fulfill her every say,
in demonstration I'd turn away.

Holding still I stare today,
wondering why these days did play,
in such a strange and compulsive way,
beating brains the constant strain.

Never did I understand,
how she related sex with stand,
behind the Pulpit, Bible in hand,
it only stopped when strangers came.

Planned so there would be no exposure to this hand.

The topic of Sex was so popular,
the congregation never did stop her,
I know more of deviant Acts,
my eyes are sore from seeing that.

Upon completion of her speech,
the people whom in pews did seek,
even more time went all week,
never did they miss a beat.

I'd would love to say a break gave way,
but upon each and every day,
the members of the congregation stayed,
always in place,
she preyed.

The conversations often seeped,
were so cruel and gave me the creeps,
one of which still blows my mind,
"You are a grown Man, get circumcised!!"

I guess that is how controls maintained,
screaming, yelling, telling profane,
consuming time with words malignant,
I believe he should have hid it.

Years upon Years subjected to ties,
as the congregation members continued to spy,
I never was able to go my own way,
those parishioners did Whatever she'd say.

Sometimes I wonder why I never spoke,
I guess the fear was a Hangman's Rope,
so snugly placed much like a Yoke,
I never thought this was joke.

I miss my friends whom took their life,
one jumped from the bridge,
the other hanged himself.

Maybe if I had spoken-up sooner,
we could have thrown-off what became their Ruler.

The guilt remains because it was my Mother,
the person whom did these awful things,
she held those deadly Reins.

She spoke her druthers,
pointed at others,
suitable targets of whom she blamed,
this life she leads disturbs my brain.

I made it through this curse of words,
although I suffered with thoughts absurd,
sadly these plays upon your life,
really have an effect unlike,
any other that would cause such strife.

When acts complete,
a suicidal leap,
the words that seeped seemed stuck in see,
'cause they'd say these things in: Rings!!

"I didn't say anything on that day!!
They're the Ones who kill themselves,
all I said was that their family would be better off if they were dead.
But everyone knows that's not what I meant,
I was speaking figuratively not literally.
He was an idiot if he took it that way."

Strangely, I was told a similar thing;

"You should take a gun and blow out your brain,
it would be the best thing,
for the Family!"

I must admit I didn't expect,
that these words would hit like whip.

I thought myself to be fairly strong,
but words have power and suggest what's wrong,
I am fortunate, I am lucky,
I worked this Curse without submerse,
and now it's back on whom said that.

The two that fell I speak of here,
suffered for so many years,
I know that this seems absurd,
but I guess if you had been in this Church,
if you had heard the daily words,
than you would know these beatings show.

Verbal abuse is really low,
beats your mind to be controlled,
mostly so you will not speak,
tell of ills and keeps you weak.

When will people realize,
that it's wrong to just take lives,
without a thought, without a care,
you speak with words in knowing verse,
to state a person's worth,
it's so much like 'A Curse.'

Dedicated to the Old Friends I've lost,
I miss you and I'm sorry for all that has been,
may Peace be with you and if it is not,
may it find you to relieve this Lot.
at April 28, 2013 No comments:
Labels: B.D.S.M Require, Google, James Blunt
Newer Posts Older Posts Home
Subscribe to: Posts (Atom)