1895 Cliff House Under Construction San Francisco, California U.S.A. And Check It Out San Jose The Tell A Scope Of An Origin Makes Lick Applicable To Just Say Francis Scott Key 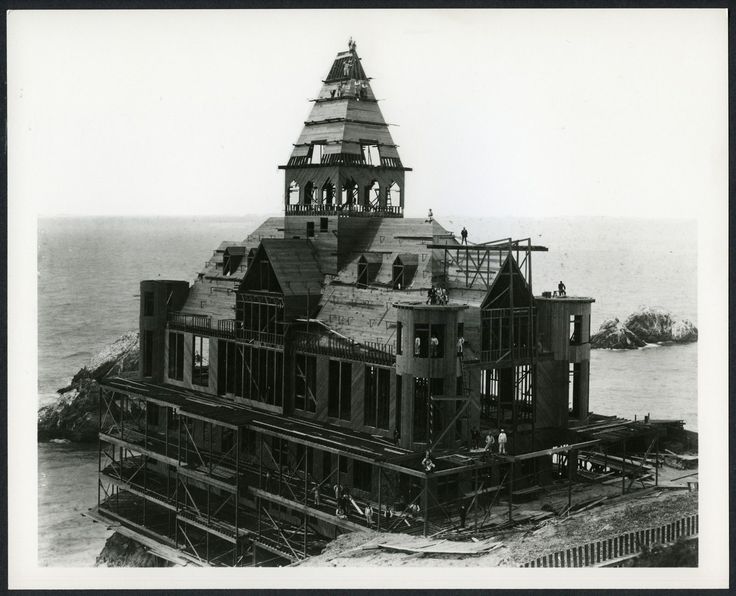 From Wikipedia, the free encyclopedia
For a high school named after Lick, see James Lick High School and Lick-Wilmerding High School.
James Lick (August 25, 1796 – October 1, 1876) was an American carpenter, piano builder, land baron, and patron of the sciences. At the time of his death, he was the wealthiest man in California, and left the majority of his estate to social and scientific causes.

James Lick was born in Stumpstown (now Fredericksburg) Pennsylvania on August 25, 1796. Lick's grandfather, William Lick, served during the American Revolutionary War under General George Washington and his son, John Lick, during the American Civil War. The son of a carpenter, Lick began learning the craft at an early age. When he was twenty one, after a failed romance with Barbara Snavely, Lick left Stumpstown for Baltimore, Maryland, where he learned the art of piano making. He quickly mastered the skill, and moved to New York City and set up his own shop. In 1821 Lick moved to Argentina, after learning that his pianos were beingexported to South America.

Lick found his time in Buenos Aires to be difficult, due to his ignorance of Spanish and the turbulent political situation in the country. However, his business thrived and in 1825 Lick left Argentina to tour Europe for a year. On his return trip, his ship was captured by the Portuguese, and the passengers and crew were taken to Montevideo as prisoners of war. Lick escaped captivity and returned to Buenos Aires on foot.
In 1832, Lick decided to return to Stumpstown. He failed to reunite with Barbara Snavely and their son and returned to Buenos Aires. He decided the political situation was too unstable and moved to Valparaíso, Chile. After four years, he again moved his business, this time to Lima, Peru.
In 1846, Lick decided to return to North America and, anticipating the Mexican-American War and the future annexation of California, he decided to settle there. However, a backlog of orders for his pianos delayed him an additional 18 months, as the Mexican workers he employed left to return to their homes and join the Mexican Army following the outbreak of war in April of that year; he finished the orders himself. 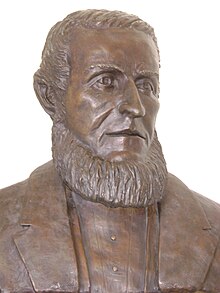 James Lick's bust at the Lick Observatory.
Lick arrived in San Francisco, California, in January 1848, bringing with him his tools, work bench, $30,000 ($784,700 with inflation to 2012) in gold, and 600 pounds (275 kilograms) of chocolate. The chocolate quickly sold, and Lick convinced his uncle and friend in Peru, the confectioner Domingo Ghirardelli, to move to San Francisco, where he founded the Ghirardelli Chocolate Company.[1]
Upon his arrival, Lick began buying real estate in the small village of San Francisco. The discovery of gold at Sutter's Mill nearSacramento a few days after Lick's arrival in the future state began the California Gold Rush and created a housing boom in San Francisco, which grew from about one thousand residents in 1848 to over twenty thousand by 1850. Lick himself got a touch of "gold fever" and went out to mine the metal, but after a week he decided his fortune was to be made by owning land, not digging in it. Lick continued buying land in San Francisco, and also began buying farmland in and around San Jose, where he planted orchards and built the largest flour mill in the state to feed the growing population in San Francisco.
In 1861, Lick began construction of a hotel, which became known as Lick House, at the intersection of Montgomery and Sutter Streets in San Francisco. The hotel had a dining room that could seat 400, based on a similar room at the palace of Versailles. Lick House was considered the finest hotel west of the Mississippi River. The hotel was destroyed in the fire following the San Francisco earthquake of 1906.
Following the construction, Lick returned to his San Jose orchards. In 1874, Lick suffered a massive stroke in the kitchen of his home inSanta Clara. The following morning, he was found by his employee, Thomas Fraser, and taken to Lick House, where he could be better cared for. At the time of his illness, his estates, outside his considerable area in Santa Clara County and San Francisco, included large holdings around Lake Tahoe, a large ranch in Los Angeles County, and all of Santa Catalina Island,[2] making Lick the richest man in California.
In the next three years, Lick spent his time determining how to dispense with his fortune. He originally wanted to build giant statues of himself and his parents, and erect apyramid larger than the Great Pyramid of Giza in his own honor in downtown San Francisco. However, through the efforts of George Davidson, president of the California Academy of Sciences, Lick was persuaded to leave the greatest portion of his fortune to the establishment of a mountain top observatory, with the largest, most powerfultelescope yet built by man.
In 1874 he placed $3,000,000 ($60,034,475 with inflation) at the disposal of seven trustees, by whom the funds were to be applied to specific uses. The principal divisions of the funds were:[3]
Lick had had an interest in astronomy since at least 1860, when he and George Madeira, the founder of the first observatory in California, spent several nights observing. They had also met again in 1873 and Lick said that Madeira's telescopes were the only ones he had ever used. In 1875, Thomas Fraser recommended a site at the summit of Mount Hamilton, near San Jose. Lick approved, on the condition that Santa Clara County build a "first-class" road to the site. The county agreed and the hand-built road was completed by the fall of 1876.
On October 1, 1876, Lick died in his room in Lick House, San Francisco. In 1887, his body was moved to its final resting place, under the future home of the Great Lick Refracting Telescope. 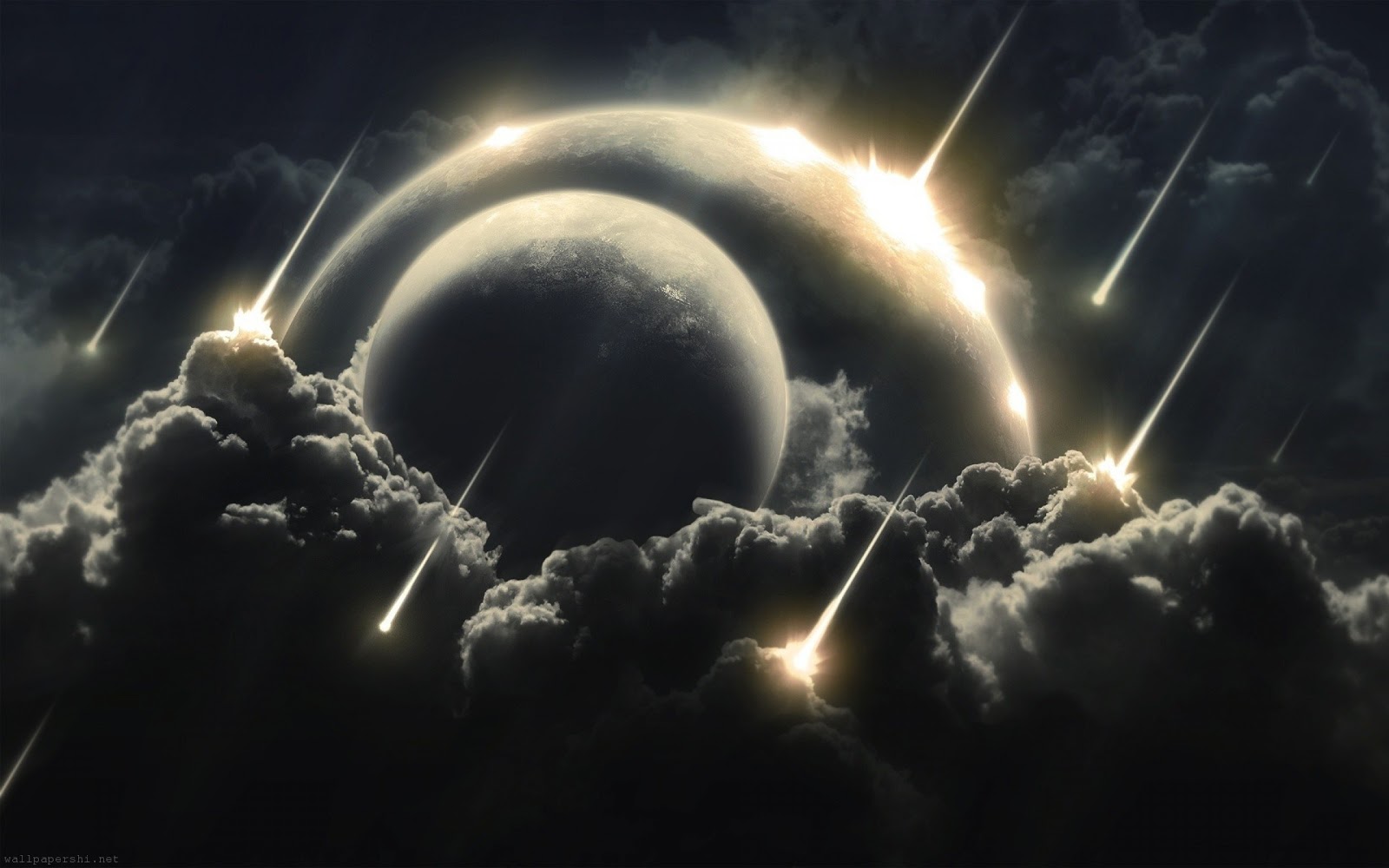 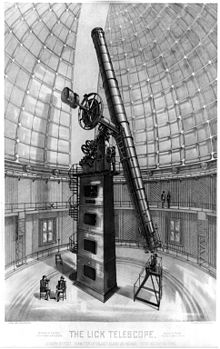 The James Lick Telescope, shown here in an 1889 drawing.
The James Lick Telescope is a refracting telescope built in 1888. It has a lens 36 inches (91 cm) in diameter- a major achievement in its day. The instrument remains in operation and public viewing is allowed on a limited basis. Also called the "Great Lick Refractor" or simply "Lick Refractor", it was the largest refracting telescope in the world until 1897 and now ranks third, after the 40-inch unit at the Yerkes Observatory and the Swedish 1-m Solar Telescope. The telescope is located at theUniversity of California's Lick Observatory atop Mount Hamilton at an elevation of 4,209 feet (1,283 m) above sea level. The instrument is housed inside a dome that is powered by hydraulic systems that raise and lower the floor, rotate the dome and drive the clock mechanism to track the Earth's rotation. The original hydraulic arrangement still operates today, with the exception that the original wind-powered pumps that once filled the reservoirs have been replaced with electric pumps. James Lick is entombed below the floor of the observing room of the telescope.
Here are some excerpts from an 1894 book describing the telescope:[2]

The height of the marble floor of the main building above mean sea level is 4209 feet. On a closely connected peak half a mile to the east of the Observatory, and 50 feet higher, are the reservoirs from which water for household and photographic purposes is distributed. A spring about 350 feet below and one mile to the northeast of the Observatory supplies excellent water. Another peak seven-eighths of a mile to the east is the summit of Mount Hamilton; it is 180 feet higher than the Observatory, and supports the reservoirs supplying power for moving the dome, raising the movable floor, and winding the driving clock of the great telescope. This system receives its supply from the winter rains falling on the roofs; the water being pumped to the reservoirs on the higher peak by means of windmills.

The movable floor in the dome is the first of the kind to be constructed. It is 60 feet (18 m) in diameter, and can be raised or lowered through a distance of 16 1⁄2 feet (5.0 m), its purpose being to bring the observer within convenient reach of the eye end of the telescope. 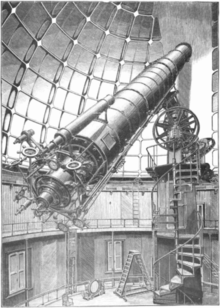 A drawing of the telescope from an astronomy book
The fabrication of the two-element achromatic objective lens, the largest lens ever made at the time, caused years of delay.[1] The famous large telescope maker Alvan Clark was in charge of the optical design. He gave the contract for casting the high quality optical glass blanks, of a size never before attempted, to the firm of Charles Feil in Paris. One of the huge glass disks broke during shipping, and making a replacement was delayed. Finally, after 18 failed attempts, the lens was finished, transported safely across country, and on December 31, 1887, was carefully installed in the telescope tube. The builders had to wait for three days for a break in the clouds to test it. On the evening of January 3 the telescope saw "first light" — and they found that the instrument couldn't be focused. An error in the estimation of the lens' focal length had caused the tube to be built too long. A hacksaw was procured, the great tube was unceremoniously cut back to the proper length and the star Aldebaran came into focus.

A photograph of the telescope
These are some of the discoveries made with the Lick telescope, as described in the same 1894 book:[2]
at September 28, 2016 No comments:
Newer Posts Older Posts Home
Subscribe to: Posts (Atom)